Like most whitetail addicts, our family enjoys scouting for, seeing and hunting mature whitetail bucks. Therefore, we prepare all year just to have an opportunity to harvest a whitetail with a respectable set of antlers. Because of our desire to harvest something with bone on its noggin, we’re in the habit of saying, “it’s just a doe” after the successful harvest of a whitetail whose sex isn’t of the male gender.

So, after my son harvested a doe last weekend, “just a doe” was on the tip of my tongue when suddenly it occurred to me — it’s not “just a doe.”

It’s Not Just A Doe

With the whitetail rut in full swing, every bowhunter hopes this time of year will offer him or her the opportunity to harvest a mature whitetail buck. Even my kids have the same hopes and dreams. Invariably, after they have rubbed the sleep from their eyes I am met with the first question of the day, “Dad, did we get any trail camera pictures last night?”

Always wanting to know what antlered deer might have showed up under the cover of darkness, a new day sends their curious minds running to what they enjoy doing this time of year – bowhunting whitetails.

Bowhunting Is Work But The Work Is Satisfying

There are some that believe hunting is easy. Now that I brought up the ‘E’ word, what is ‘easy’ anyway? Who said all the work that goes into getting permission, scouting, trimming shooting lanes, and hanging stands for an entire family is easy? Easy, no! But it sure is satisfying. 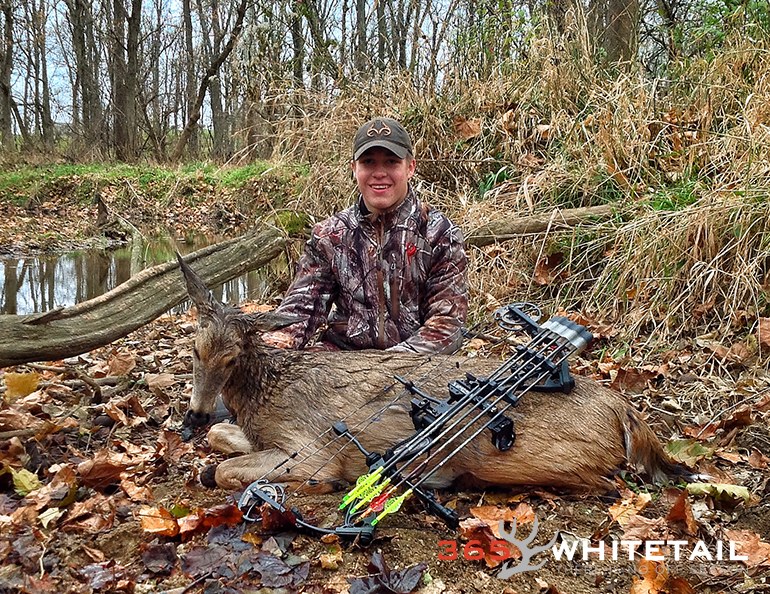 Isn’t that why we hunt? I have watched all summer as my boys have spent countless hours practicing with their bows. They take the ethical harvest of an animal very serious. Being proficient is not an option. The exploration, anticipation and preparation are all part of the hunt.

Of course, we would like to harvest a 180-inch brute we could brag about, but there is still a whole lot of satisfaction in the ethical harvest of a doe, especially for a 15-year-old. For our family, we take great satisfaction in all the work that goes into the harvest. There’s something rewarding about the journey. From the moment we start hanging trail cameras, clearing shooting lanes, and scouting for better stand locations, to the very moment of harvest, it’s all part of the hunt.

The Hunt Is A Journey And We Should Enjoy Every Step

Crazy? Maybe, but it doesn’t make it any less true. The hunt is a rewarding journey that ends with the satisfaction of knowing you earned it. So as I told my boys, it’s not “just a doe” and here’s why:


1. It’s not, “just a doe” when there were hours of practice and preparation that went into this harvest.

2. It’s not, “just a doe” when this harvest was beneficial to quality deer management.

3. It’s not, “just a doe” when my boys and I were able to share another experience together in God’s beautiful outdoors.

4. It’s not “just a doe” when my son gave the meat to a family that will greatly benefit from it.

5. It’s not, “just a doe” when an animal’s life was taken. It deserves my respect.


Although the desire to harvest a mature whitetail buck hasn’t changed, my vocabulary has. Thank you Lord for allowing us another day in the hardwoods.

Whoever is slothful will not roast his game, but the diligent man will get precious wealth. – Proverbs 12:27