Each year bowhunters become more educated about the facts surrounding the dreaded October lull. It’s the time of year when deer sightings decline and hunters are tempted to believe that whitetail are capable of a full-fledged disappearing act.

Thankfully we are becoming aware of what really happens to missing bucks during the October lull and the mysteries are being dismantled. Much to the disbelief of some, whitetails don’t have access to Harry Potters magic cloak. That buck on your hit list hasn’t disappeared—he’s just relocated.

So What Is The October lull?

The summer months find bucks traveling to and from prominent food sources. During this time of year it’s not difficult to pattern their movements and know where they are going and when. But by the time early fall arrives these patterns begin to change.

Row crops such as bean fields have started turning yellow and what was a viable food source just a few weeks ago is now vacant of feeding deer. Cornfields are now fully ripened and exposed ears are making an easy and tasty dinner for the hungry deer herd. Not only is the corn an attractive food source, but deer will often choose to simply hang out in an unharvested corn field giving your hunting property the AWOL treatment. Acorns are also dropping and mast crops are becoming the go-to food for hungry bucks.

By this time bucks have become hard-horned and are moving into fall breeding mode. Bachelor groups are breaking up resulting in bucks establishing themselves as individuals. Bucks are also making rubs and marking the core areas of what will become part of their fall ranges.

These changes in food sources and deer hormones combined with the shortened days can make a buck difficult to figure out. These are all contributing factors to what had been tagged, the “October lull”

So how do you bowhunt during the so-called October lull?

1. Create a strategy and stick to it

Just because your “hit list” buck hasn’t showed up on the trail camera for a few weeks doesn’t mean he isn’t somewhere close. He still has to eat, sleep and prepare for the upcoming rut. Before getting discouraged during this October lull and throwing caution to the wind, decide on a strategy.

Begin by putting together a strategy that is based on the accumulation of trail camera photos, adequate scouting, and seasonal food. Then ask yourself how you can mitigate risk? Will you hunt a stand and risk pressuring a particular buck? Or will it be best to limit your impact and wait until the end of October when you have a greater chance of success? How can you strategically go deeper into the timber and still have an adequate entry and exit route? What is the direction of the prevailing wind in your particular area? Have I taken all the precautionary measures of proper scent control?

These are all questions to consider when putting together a strategy that will prevent you from making costly mistakes. Once you have a sound strategy—stick with it.

2. Go deeper into the timber

With bucks staying closer to their bedding areas during the ‘October lull,’ consider going deeper into the timber. When considering this strategy, incorporate the data gathered during pre-season scouting. Where is the water, food and bedding? What food sources are closest to the bedding area? Are their mast crops close to where your buck is hiding out?

This strategy may also mean forsaking a favorite stand. We all have our favorite stands or places we hunt. It’s familiar and it may have been productive in the past, but if the deer aren’t there, it does little good continuing to hunt it.

During this transition time, bucks seem to go nocturnal. Trail camera photos during the October lull often show bucks on their feet in the middle of the night. Yet, behavioral studies have shown that during this time bucks are actually very active during daylight hours, they simply chose to travel in a smaller core area.

If you normally hunt on the edge of a food source, try moving back off the field and find where a buck “stages” before heading to feed. You can usually locate these staging areas by finding a concentration of rubs in between a bedding area and a food source. Often a buck will “stage” for an extended period of time while he waits for darkness or feels secure. Locating these areas is a tactic many successful whitetail hunters use to harvest trophy bucks during the October lull. 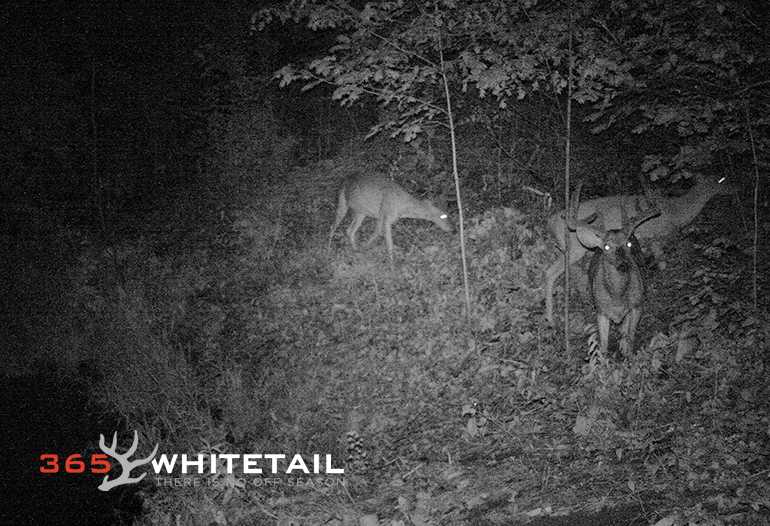 Knowing that bucks are actively feeding during the October lull means only hunting till 10:00 in the morning isn’t going to increase your odds of success. Most deer activity will most likely occur between 10:00am and 2:00pm, so staying put all day can only increase your chances.

Experienced whitetail hunters, such as North American Whitetail’s Gordon Whittington, claim they have had their best success after mid-morning. So pack a lunch, stay hydrated, get comfortable and stick it out. As a side note, don’t go back to the truck for lunch. The last thing you want to happen is for the deer to pattern you in the process of leaving and returning.

We have heard it said that you can’t kill a deer by sitting on the couch. There is some truth in that statement, but only if taken in context.

All too often the October lull is self-inflicted. Brought on by an over zealous hunter who over hunted the same stand when he should have given it a rest. Now that bucks are hard horned, they have their “brains” and are much more cautious then when in velvet. This also means bucks will be much more sensitive to hunting pressure and human scent.

During the October lull be especially careful to take every precaution necessary to limit hunting pressure. That means considering every aspect of scent control, proper entry and exit routes, only hunting the right wind, and being careful not to give away your location by excessive noise.

6. Be Patient and have fun

The October lull can be frustrating, so be patient. Don’t get anxious when you have the entire season ahead of you. It’s normal to be excited about spending time in the stand, just don’t let the excitement or the pressure to harvest that hit list buck push you to make mistakes. Keep a clear head and be patient. Let the buck you’re pursuing make the mistakes—not you.

Keep the pursuit fun. Don’t allow the pressure to perform be the driving factor. When hunting is fun you’re more likely to succeed.

If you have additional tips you’ve incorporated into your ‘October lull’ strategy, feel free to share them with us. We are always learning from our bowhunters and would enjoy hearing from you.