Every year the same scene plays out over and over across the country. Archers engage in backyard bowhunting practice with the illusion that they are somehow preparing themselves for the rapidly approaching bow season. However, what many of these well-meaning bowhunters don’t know is that nothing could be further from the truth.

If you’re looking for the ultimate method for getting the most out of your bowhunting practice, if you want to make it perfect, then consider the following tips.
[post_thumbnail size=”post-hero”]

So many times treestand hunters conduct their bowhunting practice from the comfort of their freshly groomed yard. The problem with that is in no way does shooting flat-footed in the back yard resemble the environment they will be faced with when they head afield.

Whenever I am preparing for a hunt, no matter what it is, I always try to conduct a great deal of “situational” practice. In other words, I practice exactly how I will hunt. For example, if you hunt primarily from a treestand then you should be practicing from a treestand. Why? Because shooting from an elevated position requires a host of body mechanics that are different or unused when shooting on flat ground.

If you don’t create muscle memory during “situational” practice time then you stand a greater risk of botching the shot during crunch time. Also, shooting angles to the vitals will vary greatly depending on shot angle and distance. 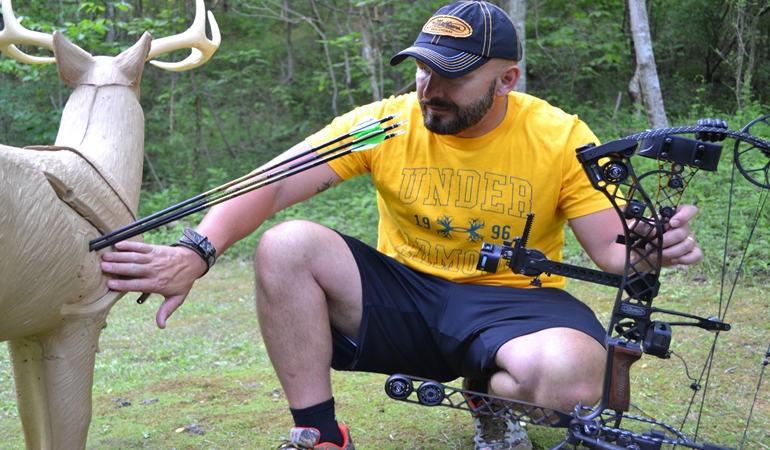 The same goes when you are planning a spot and stalk hunt. Make sure your bowhunting practice includes a good deal of long-range shots from kneeling positions. Throw in some uneven terrain and high wind and you will be getting the most out of your time spent preparing.

Also, make sure to include a few practice sessions with your actual hunting attire. This will help give you an idea about what you’re hunting clothes will actually feel like when they are put to use in a real hunting situation.

Conducting “situational” bowhunting practice is great but be sure to raise the level of difficulty by throwing some obstacles into the mix. For instance, not every whitetail bowshot will be void of arrow thwarting limbs.

The easiest way to recreate that sort of situation is to move your 3D target out of the freshly cut grass and back into the brush. This will force you to look at different shooting angles and how your bow/arrow set up reacts when faced with the task of shooting over or under obstructions.

Sometimes, even the smallest of obstacles can wreak havoc with a shooters thought process. In other words, some bowhunters panic and implode when an obstacle or two get thrown into the shooting scenario. If your eyes have already seen this (and overcame it) during your bowhunting practice then you stand a good chance of making the shot without even thinking about it when it really matters most.

Leave The Range Finder At Home

While I would never advocate leaving your rangefinder at home during a hunt, I do think it is a good idea to abandon it ever now and then during your bowhunting practice sessions.

The result might be a few bad shots, maybe even a lost arrow or two, but eventually that will lead to you strengthening your range-estimation skills. That will ultimately lead to you driving an arrow into the sweet spot of a buck that didn’t give you time to range him. The bottom line is never fully place the outcome of your hunt on a piece of technology. At the very least be prepared to get the job done in the event that it fails.

Get Your Blood Pumping

How many bow shots have you taken at whitetails with no elevation in heart rate or breathing? Probably the same as me—-none. So how can shooting under perfectly calm conditions (physically) prepare you for a nerve-racking shot at the buck of your dreams? It won’t.

The easiest way to reproduce those effects would be to increase your heart rate just prior to taking the shot. This can be done with some push-ups or a quick sprint. 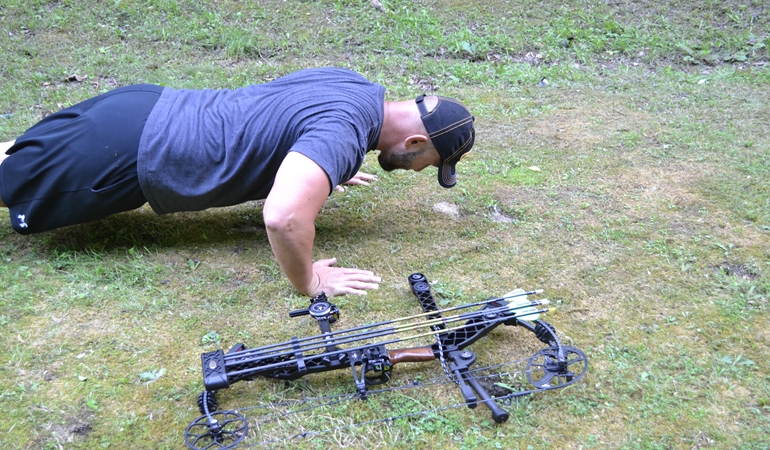 Obviously, whenever you’re shooting from a treestand you can’t do this but whenever I conduct my bowhunting practice from an elevated position I try to sprint to the 3D target and remove my arrows.
I don’t sprint back however because I have arrows in hand. But the sprint does elevate my heart more than simply strolling up to the target.

Jogging between targets on a 3D course is also a great way to learn how to shoot under physical and mental stress. You may get more than a few weird looks from onlookers but who cares. This is bowhunting and nothing should be left to chance.

I am constantly amazed at the number of bowhunters who don’t incorporate broadheads into their bowhunting practice regimen. The results can be less than desirable. While sniper-like accuracy with field points does a lot to boost confidence it matters very little unless you can do the same with the broadhead you plan to hunt with. After all, broadheads (fixed or mechanical) rarely shoot the same as field points. 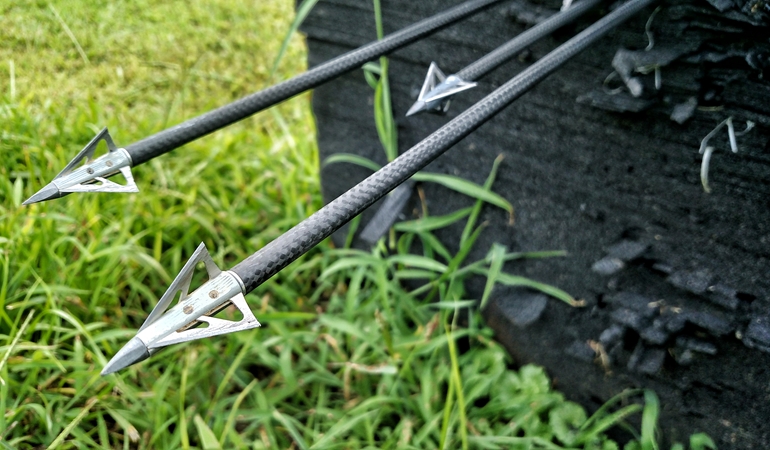 Even if your bow is properly tuned, your arrows are correctly spined and you’ve walk-back tuned your rest you can still expect a slight difference in impact point. For me, slight just isn’t going to cut it. That’s why I always keep extra broadheads lying around that are used for practice purposes. I shoot a fixed-blade head so if I want to shoot the same head all I have to do is swap out the blades and I’m ready to hunt.

Even mechanical broadheads will have some variance in how they shoot when compared to field points. That’s why manufacturers are now offering them with practice versions. Make good use of them or you could be sorry.

Get Out Of Your Comfort Zone

It’s a familiar phrase when it comes to physical fitness but it has just as much impact when applied to your own shooting. What I mean is that if you want to be deadly at 40 yards then you should do a lot of shooting from 60 yards. The reason for this is simple.

After months of shooting at 60 paces, that 40 yard shot that once seemed intimidating will look more like a golf “tap-in”. And that’s exactly what you want. I routinely conduct my bowhunting practice from 60, 70 and even 80 yards. And, while I would never attempt a first shot at a whitetail at that range, the all-to-common 30, 40 and 50 yard shots are much, much easier to handle. 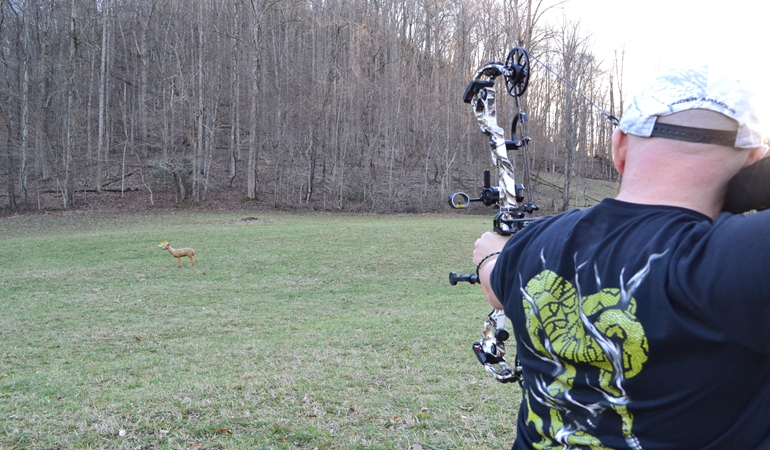 In the end everyone’s shooting “comfort zone” will be different. And that is ok. No one can tell you how far you should feel comfortable shooting. If you’ve put in the time you will know exactly what you can handle and what you can’t. Just make sure you don’t step outside of that range no matter if it is the buck of your life standing down range or a slick-headed doe.

If your current bowhunting practice routine isn’t giving you the results you want then it is time to change things up. Consider the aforementioned tips to take your game to the next level and feel free to add a few of your own in the comment section below. Best of luck this fall!

One thought on “Bowhunting Practice Made Perfect”