Whether it’s coyote hunting or whitetail hunting, learning an animal’s characteristic behavior is part of the overall experience. And for the new coyote hunter, chasing predators is an exciting way to expand one’s knowledge of another wildlife species.

Much like whitetail hunting, to be a successful coyote hunter means taking time to carefully consider how the wind and the lay of land will impact a coyote’s movements. Once understood how these two elements play a vital role in the hunt, setting up for coyotes will become second nature.

As we mentioned in A Beginners Guide To Coyote Hunting, knowing where coyotes are is the main ingredient to a successful hunt, but once you gain permission to hunt prime coyote habitat, making the right stand setup is key.

Coyote Hunting: How To Set Up

Much like picking the perfect tree in which to hang a treestand, choosing where to set up and call is never done at random—the location is chosen for a reason.

When determining a stand location, wind direction is the first item to take into consideration. Before making a stand draw a mental picture of how you’ll need to set up in order to insure the wind is in your favor.

The wind plays several factors when coyote hunting: First, it determines which direction your scent is going. Second, it influences where a coyote is likely to come from. Third, it controls how loud you need to call. Fourth, it dictates how quiet you have to be when entering an area.

Remember when setting up to call that coyotes have an incredible sense of smell. Whatever you do, don’t think your location is ‘good enough’ if the wind is carrying your scent in the direction a coyote is most likely to approach from.

Coyotes can smell human scent for several hundred yards, so make sure your stand site is not sending scent signals and educating a coyote as to what and where you are before it’s within shooting range.

Considering wind direction is not only important for scent control, wind can also mask the sound of your call. The windier it is, the louder you may have to call within a given area.

Here in the Midwest we predominantly hunt areas that are heavily wooded. Unlike the open terrain of the West, sound does not carry as far through dense stands of timber. Thick timber combined with heavy winds often means prolonged and loud calling in order to get a coyote to respond.

Wind also determines the most probable direction a coyote will come from. Coyotes like to smell what they’re coming to, especially if it’s the sound of an animal in distress, so it’s important make sure you have good visibility, and can shoot towards the downwind side of your stand.

On windy days I know my approach into an area does not have to be as stealthy. The wind will mask the sound of my approach even when walking in noisy corn stubble. But on still days when sound can carry a greater distance—a more stealthy entrance and setup will be required. Just remember, no matter the circumstances, wind direction and wind speed are paramount when making a stand. 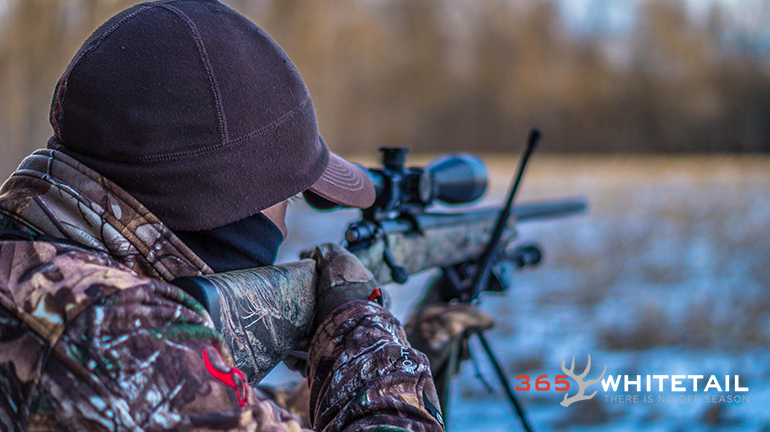 While the hunter should strive to remain ‘downwind’ of an approaching coyote, this does not mean you always have to set up with the wind directly in your face.

‘Keep the wind in your face,’ is an idiom used to suggest the coyote hunter not allow their scent cone to reach an approaching coyote. It does not mean you literally hunt with the wind directly in your face at each stand.

My personal preference is to set up using a crosswind. This means the wind is blowing from right-to-left or left-to-right in front of my stand. Hunting a crosswind helps guarantee if a coyote does try to circle downwind, I can easily get a shot off before it reaches my scent cone. A crosswind can also be used to your advantage if wanting to extend the reach of your call, a crosswind will assist in carrying the sound for a considerable distance.

Illustrated below are a few of our recent stands. Here in Indiana we predominantly hunt farms with small patches of timber and open fields. Here you can see how we set up using a crosswind and how the coyotes have actually responded.

The first thing you will recognize in these illustrations is you can’t say ‘always’ when hunting coyotes. Coyotes don’t ‘always’ come in from the leeward side and they don’t ‘always’ come from the direction you might expect. For this reason we usually position our FoxPro caller (as illustrated below) around 75-yards in front of the shooters.

The red line is the path the coyote took towards the call. At this stand, we had only called around 5-minutes when the coyote responded to the call. As you can see, the coyote came off a ridge to the west of the shooters, crossed a creek and into the field edge—the rest is history. 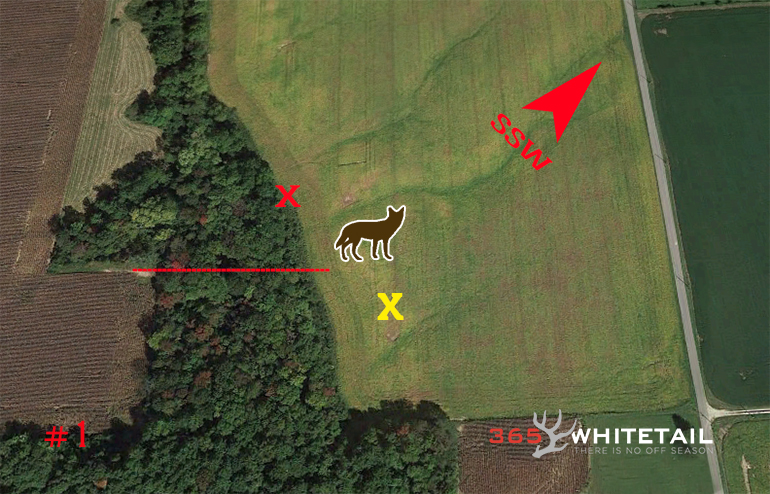 In figure #2 the red X represents the shooters. The yellow X represents the FoxPro electronic caller, FoxPro motion decoy and full body coyote decoy. As in figure #1 the red line is the path the predator took towards the caller.

At this particular stand we have called in three coyotes and a beautiful red fox. None of which came from directly down wind. This is an example of how terrain will impact the way a predator will approach the call. 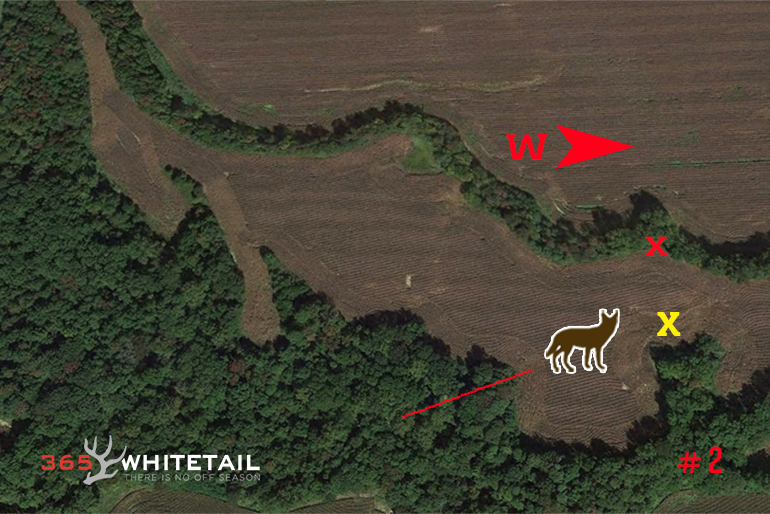 In Figure #3 the red X represents the shooters. The yellow X represents our FoxPro electronic caller, motion decoy and full body coyote decoy. Again, the red line is the path the coyote took when approaching the call.

Initially we had made a stand around 200-yards to the east of what is pictured and the sound of our calling should have reached the peripheral of this area. After setting up at this secondary location for almost 25-minutes a nice male coyote responded to the call.

I knew when setting up there was a road that exits into the inside corner of the field. This was the ideal place for a coyote to show up—sure enough—it came right down the road and into the field as anticipated. 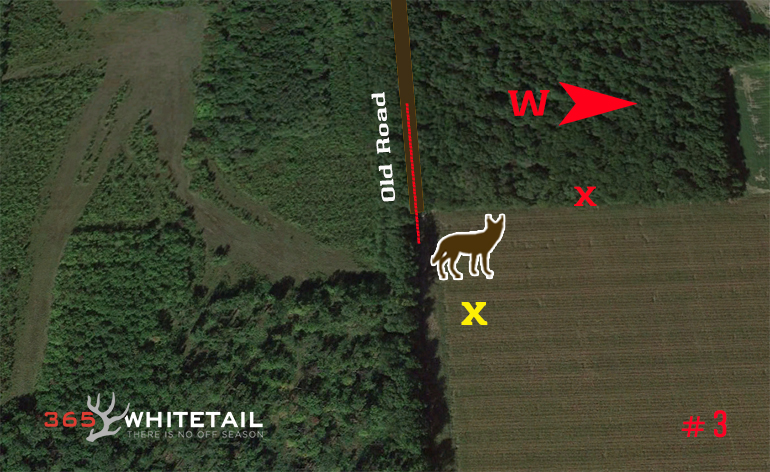 Some may look at these illustrations and wonder why we set up as we did. First and foremost was due to the wind direction and second of all because of the terrain. Looking at the photos it would seem there are more ‘ideal’ places to set up, but our setups need to allow for good visibility of an approaching coyote. The ground is not flat as it may look, therefore if you can’t see the coyote approach, there’s no need to set up there. The terrain can make all the difference when trying to get a shot off—so you have to do what you can to make the landscape work for you.

Here in Indiana, we predominantly hunt field edges off of thick timber. Before making a stand I use the OnXMaps mobile app to check both topographical and satellite imagery. This app makes quick work of figuring out the terrain surrounding my stand. Taking the time to look at the lay of the land will allow you to know how a coyote will most likely approach your stand.

Referring to the illustrations above, we always try to use terrain to our advantage. Behind the shooter in figure #2 is a 30-foot drop off. The field in front of the shooter is not flat but includes rolling terrain. The entire field edge, to the south of the shooter, also drops off steeply. The terrain requires any predator to come up a steep embankment before it can see the motion decoy. Usually when coyotes climb an embankment of any kind and reach a field edge they will stop, which allows the shooter an opportunity to take the shot.

In figure #1 the shooters and decoys are at the bottom of a large bowl. This bowl runs north and south and extends into the timber. The bowl funnels the sound of the call directly into the timber and provides a safe shooting zone since there are houses in the area. Here we called in two coyotes within 5-minutes. The female came in first and the male hung up, but at least we got one out of the two.

When preparing to make a stand always try to pinpoint the path of least resistance. If you’re hunting in pasture land a coyote will often follow the cattle trails when coming to the call. If hunting field edges a coyote may come down a fence row or funnel through some other natural corridor. Again, each location will need to be hunted based upon its terrain and how you believe a coyote may try to access the location of your call.

Setting up for coyotes is not difficult, it simply requires you to take in your surroundings and draw the best possible conclusion. And good news is, the more you hunt the more you’ll learn. So get out there and enjoy hunting coyotes!

One thought on “Coyote Hunting: How To Set Up”