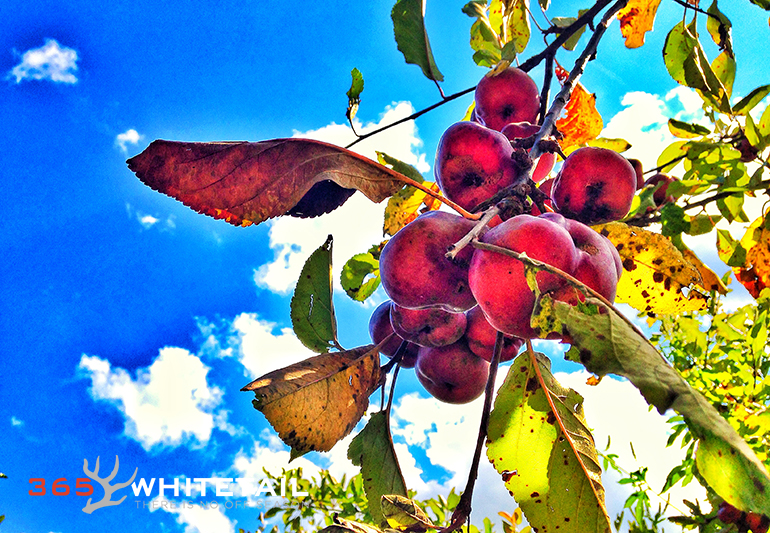 One of the whitetail’s favorite food sources during the early season is soft mass. In the Midwest this can include apples, pears, and berries. In the South, you can add persimmons to the list. Therefore, finding a source of soft mass for early season bowhunting can increase your odds by a landslide.

Why Early Season Bowhunting Should Include Soft Mass

In their book, Whitetails: From Ground To Gun, Neil and Craig Dougherty address the whitetail’s diet in a chapter entitled, What Deer Need. Here they explain why whitetail will ‘hone in’ on soft mass:

“Actually, deer are what biologist call “concentrate selectors” which means they are very selective about what they eat, and when they find something they like (most nutritious and palatable), they concentrate on it; thus the term “concentrate selectors.” When the acorns are on, the deer flock to them like bugs on a porch light. They return and return until something more attractive becomes available or they clean them up. They select tender greens and forbs in the spring and shift foods with the seasons. A whitetail can get by on woody browse in winter but he won’t be eating much in the way of twigs and bark when tender young greens or berries or fruits are available. Whitetail evolution has left them with narrow snouts that are perfectly designed to pick up the most tender and attractive foods for their environment. They will leave clover and chicory food plots for acorns and often wont eat brassicas until it has been frosted a time or two. Like a person at an all-you-can-eat buffet, they choose what they crave and pass right by the other stuff.”

And few food sources offer the whitetail more of a smorgasbord than soft mass.

The most obvious source of soft mass is an orchard, but don’t get stuck on thinking you need a few hundred trees to attract whitetail. Deer will travel some distance to feed on soft mass from a single tree.

Soft mass can often be located in the most out-of-the-way places. Here in Indiana we’ve found soft mass on abandoned farms. While living in the West we located several old homesteads which had both berry bushes and apple trees. These hidden gems can be a magnet for whitetail and are often overlooked by other hunters.

If you’re wondering where to set up for early season bowhunting, consider positioning yourself between bedding and a source of soft mass. You just might be surprised who’ll come in for dinner.