Having been raised on a farm and in a farming community, field crops and row crops were always part of our family’s whitetail hunting strategy.

Maturing row crops meant long drives through the countryside to see what deer were ‘in the fields.’ With a bag of Doritos, a few Cokes, and an old pair of binoculars, countless evenings were spent glassing food sources to see where bucks were feeding. And those childhood lessons continue to impact the way I hunt today.

Growing up around tractors, cultivators and combines has naturally offered a familiarity with alfalfa, soybeans and corn. Therefore I take hunting around agriculture for granted. But I also understand some hunters may not have had similar opportunities of hunting near these premier food sources.

While not exhaustive, here are a few simple tips to consider when hunting over field crops and/or row crops this season.

Some studies claim over 60% of a whitetail’s yearly diet can come from agricultural crops. And since the data suggests field crops such as alfalfa, along with row crops such as soybeans and corn to be favorite foods — crop fields are one of my preferred places to hunt. 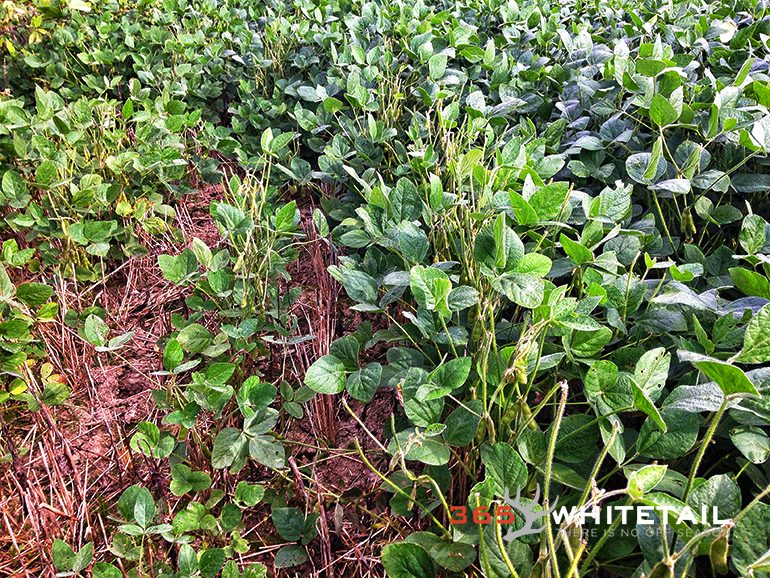 In early summer after the young soybeans have pushed their way through the soft soil, whitetail will be found eating these tender shoots. As the soybeans develop, large groups of whitetail will often be seen devouring the soft velvet leaves. But just as soon as the beans begin to die and a hint of yellow spreads across the soybean fields, deer will move on to more desirable food sources such as lush alfalfa or the exposed ears of ripened corn.

Green, Yellow or Gold Can Make All The Difference

Here in Indiana we are already seeing deer move out of some of our hunting areas due to the ripened beans. Thankfully, on one of the farms we hunt the soybeans were planted late. On this farm the beans are still green and the deer are continuing to find them palatable. 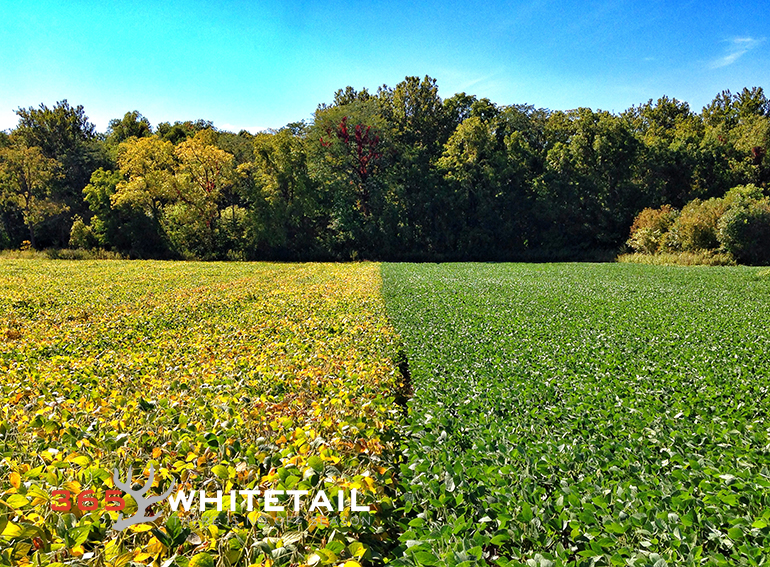 On another farm the deer are no longer feeding on beans and have moved into the golden corn. Fresh tracks and trampled corn stalks offer telltale signs as to what food the deer (and raccoons) are finding to be the go-to meal of the moment.

These ever changing food sources can make for a frustrating chess match when trying to pattern a particular buck, but it’s a combination of strategy and patience that will win the day.

If you’ve already positioned a stand in hopes to catch a buck moving from bedding into a bean field and the beans are already turning yellow, consider leaving it for later in the year, or move it to another food source such as alfalfa, corn or hard mast. If the deer have moved, then you need to.

With deer moving out of the beans and into standing corn, don’t overlook the natural corridors created in between the timber line and the first few rows of corn. Not only will bucks travel between these two landscape features, but these natural corridors will become home to scrapes and rubs. As long as the corn remains unharvested, bucks will also use the security of these small corridors when they begin to search for does.

If you know of corn which will remain standing until late October, hang a stand a few yards off one of these timber/corn corridors. Field corners or a 90-degree meeting of two corridors are a favorite place for whitetail to enter and exit crop fields. Take the time to study these features and place your stand accordingly.

And remember, these types of corridors are also great places to hunt during the dreaded October Lull. 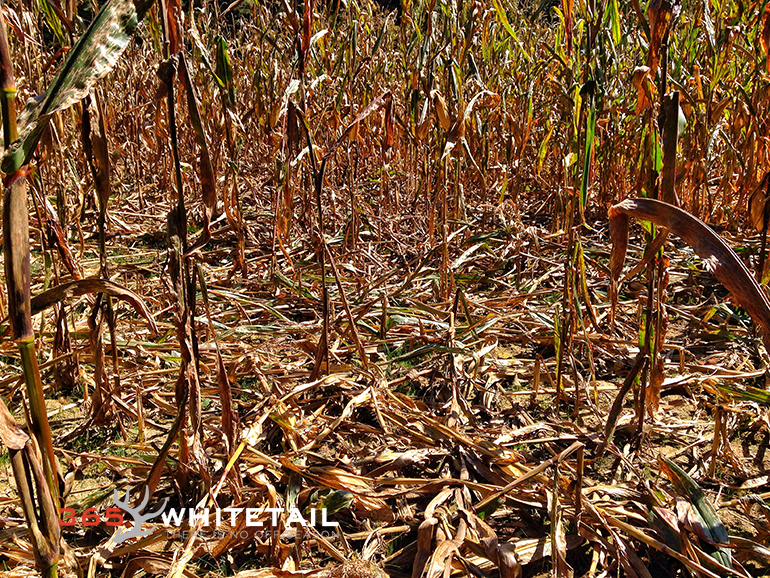 Once beans and corn are harvested whitetail will return to pick through the stubble. If you can be in your stand immediately after threshing, you are very likely to see several deer eating the leftovers.

Depending on when the crops were harvested deer will often choose to feed in bean stubble over corn stubble. Whitetails are known to pick through the scattered chaff like my kids pick the cashews out of mixed nuts. But as temperatures drop and winter weather sets in, deer will return to feed in corn stubble and on hard mast such as acorns. 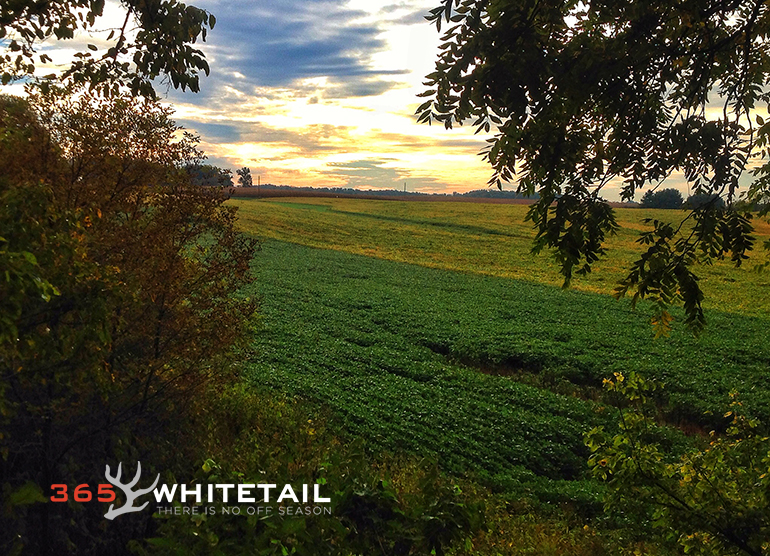 If hunting during the late season and able to access a standing soybean field, by all means make sure you are set up on a main trail leading into that field. Beans will provide a late season smorgasbord for hungry whitetail; even if there’s standing corn nearby. Soybeans contain a considerable amount of protein and fat, and winter whitetails know just how much nutrition is held within those pods. During the late season deer will travel a considerable distance to eat the same beans they turned up their noses to in October.

While not all areas provide the same type of crops or exact amount of cropland, all deer have changing food preferences throughout the year. By taking the time to learn what a whitetail’s stomach and body are craving, you’re odds of success are sure to increase.

Be patient, shoot straight and have fun. 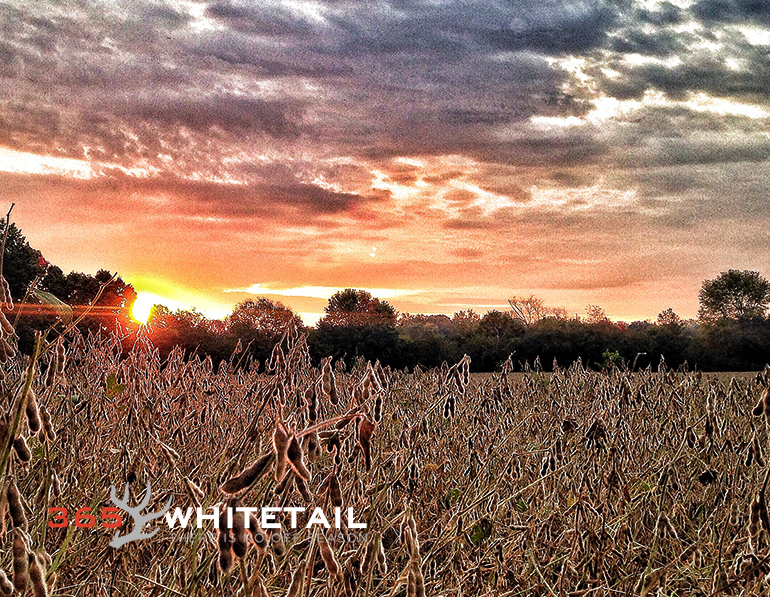