Little compares to the anticipation that accompanies early season bow hunting. From the scouting and strategizing to the camaraderie shared with bow hunting brothers, early season can seem almost sacred.

Although it requires a delicate balance of action and patience, early season bow hunting can be the perfect time to arrow a trophy. While some bowhunters put their stock in the whitetail rut, others choose to wrap their tags around trophy antlers at the very onset of archery season. Knowing that early season can be extremely productive, here’s a few early season bowhunting tips you can incorporate into your strategy that just might have you tagging out earlier than normal. 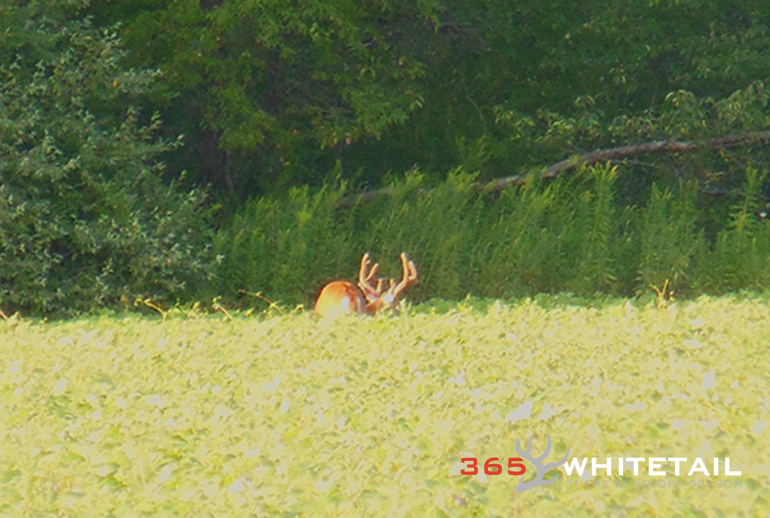 To adequately put together an early season bow hunting strategy will require locating whitetail food sources. Although deer may have ample browse in early season, you’re likely to find them feeding where they can devour the best nutrition. In the Midwest, that might be in a foot plot or soybean and corn fields that have yet to be harvested.

Another great food source is acorns. Especially in early season, deer prefer white oaks. Whitetails will ignore other favorite foods as soon as the white oaks start dropping their candy.

Whitetail guru Doug Howlett says, “A heavy acorn crop will keep bucks in the cover of the forest and out of the fields even when they hold prime soybeans or corn. Monitor when acorns begin to drop, and when they do, that’s where you need to be. Even if Farmer John just cut his corn field and littered the ground with waste grain or the soybeans are lush and green, the cover of the forest and the protein in the acorns will keep bucks hidden from sight unless you’re there to watch. Think about it: If I called Danny to tell him I was making grilled cheese sandwiches and then someone else invited him over for pizza, where do you think he’d go?”

By finding these food sources you can identify where a buck is coming to dinner. With a quality food source at their disposal, whitetail can be patterned more easily, giving you an opportunity to be in your stand when the dinner bell rings.

When putting together an early season bow hunting strategy, there is no substitute for scouting. Today’s trail camera technology makes it possible to determine a bucks early season patterns, which in turn enables you to capitalize on his vulnerabilities. Careful placement of multiple trail cameras can help to nail down a bucks time of movement, travel patterns and behavior characteristics during daylight hours. If you can time a bucks movement during daylight hours, you know there’s a great chance for a harvest.

Cameras such as the Covert Code Black will even send pictures to your phone or email, keeping your hunting area scent free and saving you countless hours driving to and from your property.

When you boil it all down, the ability to pattern a mature buck is what separates the legendary from the lucky.

Another effective ways to gain an edge in early season bow hunting is to set up at a safe distance and scout out the food sources in your hunting area. Whether it’s with a spotting scope or binoculars, spend some time watching the area you plan on hunting to determine the wind direction, temperature, barometric pressure and moon phase that coincide with a particular bucks travel pattern.

Adam Hays III has scouting down to a science. With three 200-inch-plus bucks on his roster and others that top 170 inches, Hays has proven that pre-season scouting is the key. Hays secret is to locate a trophy buck and scout him from a distance until he is intimately acquainted with that deer, its habits and movements.

Hays attributes this tactic to Miles Keller who called this “Hunting from the outside in.” What Keller meant was, “…he would start on the outskirts or fringes of a bucks territory, and methodically move in slowly, getting closer and closer to where he needed to be to kill a buck. He didn’t want to dive right into a bucks core area, make a wrong move and blow him out. He would observe from a distance, try to figure out how he could get closer without alerting the buck, and keep moving closer (safely) until he knew exactly what the buck was doing and exactly where he needed to be to get a shot.”

Scouting and patterning are early season bow hunting tactics that require a lot of patience, but in the end they are sure to pay big dividends.

Early season bow hunting means late-summer heat. Not only does this create a need for the bowhunter to stay hydrated, but the deer as well. Although deer receive plenty of moisture from the foods they eat, they do require hydration. If you have access to an isolated pond or water source, check to see how much the deer are using it.

A water source is also a great place to set up a trail camera and monitor the water for activity. If you’re in an area where there are numerous water sources, it maybe difficult trying to use water as a drawing card. If it’s been hot and water is limited, then it just might be the ticket. Scout for tracks and check travel routes to and from the water hole. Many a trophy have been harvested over a well-used water hole.

Big deer aficionado Mick Hanback writes, “Working water into your early season routine is smart any year and especially this fall with the epic drought. The hotter it is, the more deer drink and linger in the shade around water. A river or creek, or pond or swamp that isn’t too stagnant is best. Sneak to a water hole from downwind and set up quietly, because some deer are sure to be bedded close in the cover. During a hot spell you might score from a water stand morning or afternoon.” 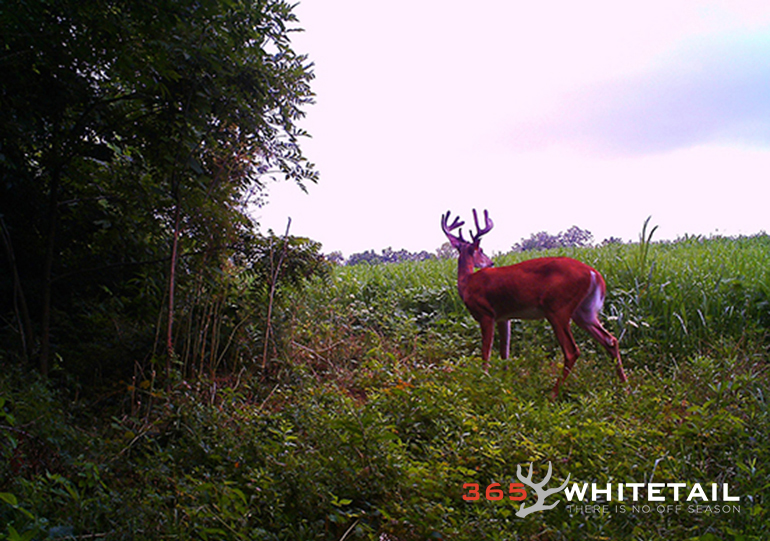 Patience is not everyone’s forte, but it’s a must when hunting trophy whitetail. Early season bow hunting success comes down to making sure you aren’t the one making the mistakes; leave that up to your opponent.

Wait until the wind is perfect and the conditions are just right before heading to your stand. Simply put, “Stay out until it’s right to go in.” With applications such as the Scout Look app you can have instant insight into what the wind is doing in your particular hunting area. As difficult as it may be, if the wind is wrong don’t go to the stand.

Pay attention to every aspect of your scent control. From breath to boots, make sure you’re limiting the scent you leave behind in every way possible. I personally prefer not to hunt a stand more than 8 hours in a week. There’s no science in that number, it’s just a goal I set to limit impact and prolong my chances in that given area.

Dan Perez of Whitetail Properties offers a helpful tip and suggests setting up alternate stand locations to keep your impact to a minimum. Perez says, “Depending on the situation, I average a different stand location every two days. In addition, I give each stand at least two days rest, and generally my morning stands are in different areas than my evening stands. It’s been my experience: afternoon stands are not productive during this period. During the early season it is far more effective not to draw any attention to your location. At different times rattling and grunting can be very productive whitetail luring techniques. However, early on, your goal is to intercept your quarry as he travels between his feeding and bedding area, or at his feeding and bedding area, or at his feeding area. Granted, bucks do quite a bit of sparring during this period, and the tickling of antlers would probably draw their attention. Nevertheless, if they catch you, the game is over.”

Season only comes once a year, but if you blow an opportunity at a buck of a lifetime, it’s not worth the rush to get in the stand. Be patient.

5. Have An Entry And Exit Strategy

Most early season bow hunting strategies include a food source. The ultimate goal is to intercept a buck as he travels from his bedding area to the kitchen. Whether a foot plot or row crop the idea is to set up just off the travel corridor and wait for the buck to head to dinner.

In some instances the lay of the land will limit a bowhunters path of entry and exit to and from the stand. This is one reason I don’t usually hunt first thing in the morning when hunting a food source. Most entry routes demand I chance an encounter in the field or on the edge of the field where a buck may be heading to bed or may already be bedded. It’s all too likely I might bump the deer, so to limit my overall impact, I don’t risk it. This is all part of an early season strategy and helps limit overall impact.

The same principle applies on an evening hunt. It’s best not to exit the stand until it’s dark, this again prevents the possibility of alerting deer to your location. When the sun sets and you exit your stand, don’t risk walking through the field that your buck may be feeding in. If possible, make an alternate route to and from your stand. Natural drainages, ditches and low-lying areas are great for this. If you don’t have some sort of natural exit route, make an alternate exit route. It’s work, but well worth the time and effort.

If you hunt row crops and are fortunate enough to have a partner who can pick you up in some sort of farm utility vehicle, this is a great way to exit your stand. Deer are more accustomed to farm equipment and the vehicle is less likely to run a deer out of that area for good.

Bill Winke of Midwest Whitetail suggests, “If you don’t get the buck the first time you hunt him, you need a good plan for getting back to your vehicle without spooking non-target deer that are already feeding. Try to place your stand where the deer will be out of sight shortly after they pass, giving you an opportunity to climb down and sneak away without being seen. Use the terrain and cover to your advantage. Your exit route will likely take you well out of your way, looping back through the timber or following a creek or erosion ditch in the opposite direction.”

No matter where or how you hunt, early season is a great time to put together a strategy that will work for you. There’s little doubt that early season bow hunting can yield great results and taking these simple steps might increase your chances of success.