It was the unmistakable sound of deer, not just a couple deer, but several. No more than 20-yards from my stand were a number of deer walking on the outside edge of the cornfield.

While the lack of light prevented me from seeing anything but silhouettes, what I could see was these deer had staged a considerable distance beyond my stand—the setup was ‘20-minutes’ too far South. 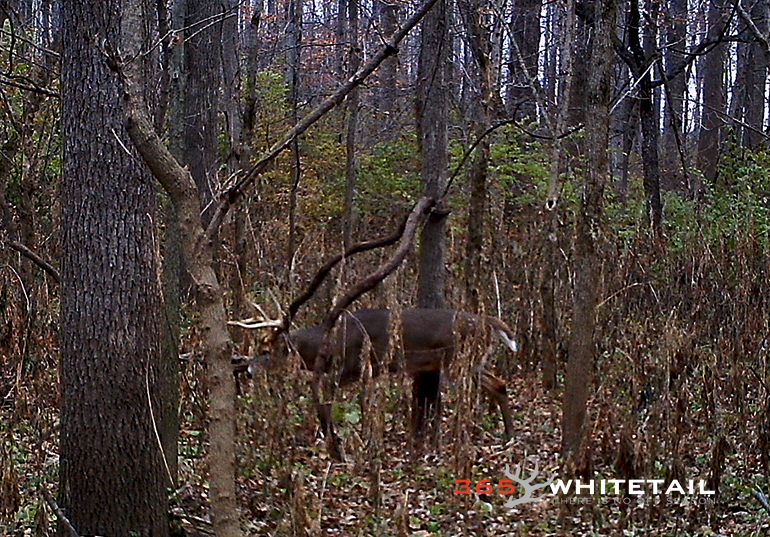 Late season bowhunting normally takes place near prime food sources. And while it’s easy to think of deer making a beeline from bedding to food, in most cases deer ‘stage’ before feeding.

These ‘staging’ areas are where deer transition to after they exit a bedding area. Think of staging areas as a safe and secure area where deer loiter, and then move through while on their way to a preferred food source.

So if the deer you’re hunting are arriving after dark, the trick is to locate and hunt staging areas. This might mean moving your stand beyond its current location. And while no bowhunter wants to move a stand this time of year, if the deer aren’t visible during legal shooting hours, you might not have a choice.

Depending on the weather, the type of terrain, and the amount of hunting pressure, staging areas can differ from location to location. I’ve seen bucks use a cedar thicket, a grassy field, a small but secure food source and even a fairly open oak flat to stage in.

When hunting late season whitetails there are things we know positively, other things we’re pretty sure of and a considerable amount of things that take time to figure out exactly. Late season staging areas fall into the last category—it takes time to find the exact location where a mature buck is staging.

Preferably, staging areas should be located post season, however, that’s not always possible. As Bill Winke says, “Picking the perfect tree is really an evolution that occurs over the course of several seasons—at least two or three seasons.“ So don’t get discouraged, learning where deer stage can take time.

Whitetails are known to bed with their back to the wind. When a whitetail, especially a whitetail buck, leaves its bedding area it will normally travel at a 45-degree angle to or directly into the wind. As a buck exits his bed, and begins moving towards the food source it will then ‘stage’ in an area downwind of the food source until last light.

If a buck cannot enter the feeding area with the wind completely in its favor, it may stage at a vantage point where it can visually scan the field before moving into the open.

Finding late season staging areas begins by studying aerial maps and researching prevailing winds. This research will assist in giving you an understanding of how and where a buck might enter the food source using the wind to its advantage. Now that bucks have been pressured for several months, and are very wary as a result, they are much more likely to stay on the downwind side when entering a food source.

After researching terrain features and wind movements, draw some conclusions. Then carefully go in during an afternoon and backtrack on the main trails leading to the food source. Staging areas are often found 50-100 yards off a primary food source and may not be all that far away from your current stand location. 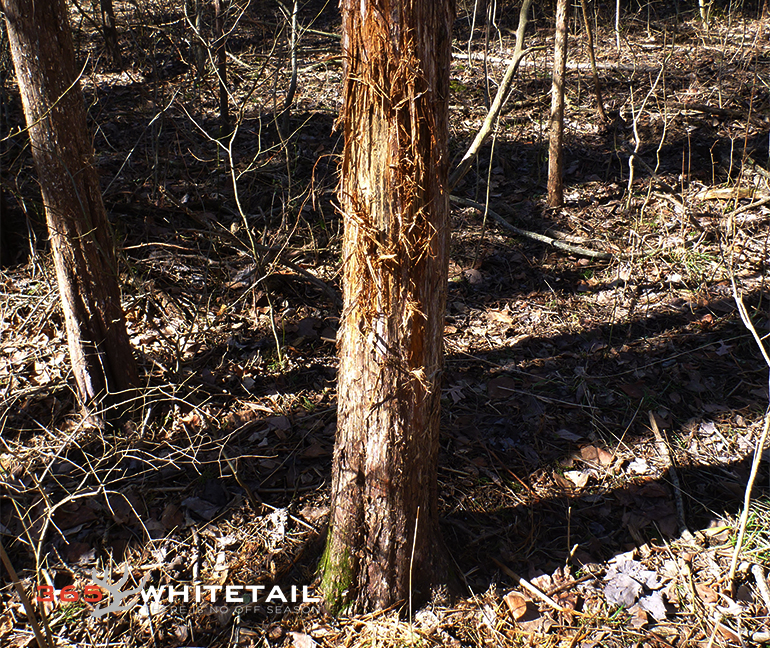 During extreme cold deer will often stage in adequate thermal cover. This cover, such as a cedar or pine thicket, will provide some form of protection from the severe winter weather.

Due to whitetail needing to conserve energy during extreme cold, I’ve seen them stage in thermal cover for a considerable amount of time, especially if it’s windy. Winter winds are known to subside as darkness falls and during the late season deer will take advantage of staging areas that offer a wind break.

When searching for staging areas in thermal cover, take note of any prior signpost activity, such as rubs or scrapes. Also pay attention to any fresh droppings or a significant amount of tracks, these can be telltale signs you’ve found where a buck stages before moving to a food source.

If hunting in an area with ridges and valleys, bucks will either stage on a vantage point, such as a knob or bench, where they can view the feeding area before entering it, or they will stage in a low area where they can remain completely out of sight.

Several years ago I hunted a staging area that was located at the back of a large wheat field. At the back of the field was a deep depression that prevented anything or anyone from seeing the deer as they entered the field.

Each evening up to 40 deer would pile into that depression. They would wait until dark then move into the open field. The issue for these deer wasn’t necessarily cover, but security.

Currently I’m hunting a farm where the bucks move from bedding, up the ridges and then stage on various acorn flats. These flats are relatively open but surrounded by young saplings, which provides a type of sanctuary.

Each hunting area will have its peculiar differences and must be hunted accordingly. Whatever the terrain, staging areas will be unique places where deer feel secure.

Hopefully these tips will get you started in the right direction, but nothing can take the place of firsthand observation. Sometimes you have to set up and observe in order to pinpoint the behavioral characteristics of the bucks within the terrain you’re hunting. 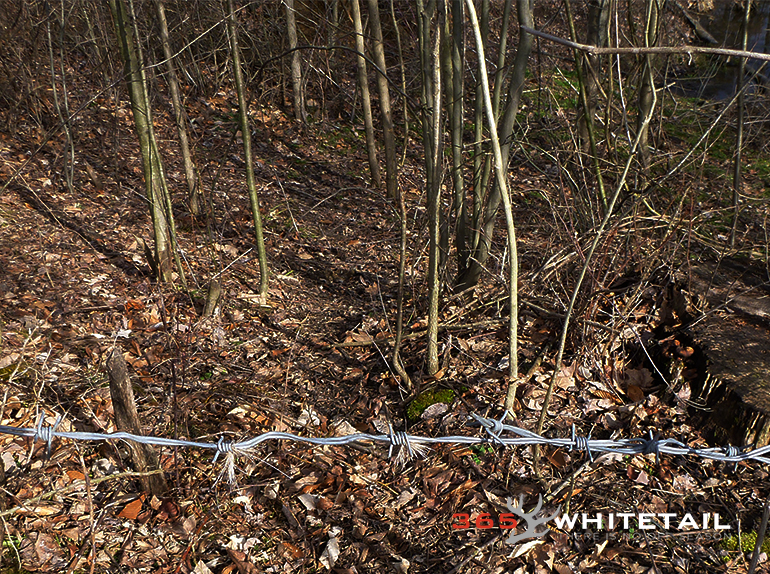 Depending on where your hunting property is located, you may be hunting heavily pressured bucks. So far they’ve survived archery season, the rut, firearms season and they’re keyed in to one thing—survival.

When hunting pressured bucks during the late season, bedding and staging areas can seem impossible to locate. If they could, these bucks would wrap themselves in an invisible cloak. They’re not taking any chances.

I remember watching three late season whitetail bed in a small patch of grass located smack-dab in the middle of a harvested grain field. Later in the day I watched three hunters walk within 10 feet of that little patch of grass. I shook my head wondering if the deer had moved without me seeing them. But, at last light all three deer stood up and made their way to the food source. This was a perfect example of how late season whitetail react to pressure.

Hunting pressured whitetail requires us to think like one. Where would you go to escape hunting pressure, yet be within proximity of a prime food source? Again, this is where satellite imagery and topographical maps can help you figure out where a buck might be hiding.

Often these pressured bucks will head to a small patch of cattails, a deserted pasture, an abandoned orchard, a small bench, a point off the end of a ridge, or a small island in a body of water. Wherever they locate, it will be impossible for any predator, human or otherwise, to approach without being detected. These bucks know that locating and staying in an out-of-the-way sanctuary is their only means of survival.

This is where a trail camera can assist in locating a pressured buck’s staging area.

Although I would be very careful in taking anything into a staging area that might make a buck uncomfortable, you can consistently relocate a camera farther down a main trail leading to a food source. Continually moving the camera toward the direction a buck is coming from will give you a good idea where the buck is staging.

As always, be extremely careful when locating late season staging areas. Remember, scent control is paramount and never hunt a staging area unless the wind is perfect. These staging areas are like a ‘safe house’ for whitetail and if you’re not careful about scent and sound, that buck may not return this season.

While we’ve touched on only a few aspects of locating and hunting staging areas, once found these magical places can hold the secret to late season success.