The coyote meticulously zigzagged its way across the meadow. Every move mimicked the proficient efforts of an experienced bird dog. Intentionally keeping the wind in its face, the predator diligently worked towards the unsuspecting prey. Without a doubt, this four-legged hunter was operating by a deliberate and calculated strategy.

Sensing the impending danger a mature doe stood to confront her stalker—it was an instant impasse. The doe stood her ground and so did the coyote.  After a few tense moments, the doe made a sudden lunge and charged her menace. What ensued was a drag race of survival.

Running as close to the coyote as possible the doe repeatedly kicked her front legs in an effort to strike the predator with a hoof. Tucking tail the coyote realized it was no match for these weapons and surrendered in temporary defeat. This day’s score ended with—deer one, coyote zero.

As the doe returned to her original bedding area, it occurred to me this battle had not ultimately been between doe and coyote. The objective of both hunter and hunted was bedded in the tall grass, it was a newborn fawn.

Over the course of the last several years there have been numerous reports on the widespread increase of coyote populations. These studies confirm the coyote to be an adept omnivore whose ability to survive has made it adaptable to both rural and metropolitan areas.

Through a merger of urban expansion and translocation, coyotes now thrive across much of the North America. Expanding their range to include most of the Northeast and Southeast United States, coyotes are now familiar residents in areas where at one time they were considered complete strangers.

Just over two decades ago it was considered uncommon to see the allusive coyote in the rural Midwest, much less catch a glimpse of it in populated residential areas, but today we have become accustomed to seeing the coyote almost anywhere. These common sightings only confirm the coyote’s continued and rapid proliferation.

Whitetail researchers recognize this exponential growth in coyote numbers can make a definite impact on overall deer populations. Although much debate surrounds the coyote, its impact on fawn recruitment has been readily documented.

Comprehensive studies suggest that with the increase in coyote numbers comes the concurrent decline in deer fawn recruitment. These studies, done in several Southeastern states, attribute coyote-fawn predation as a direct contributor to falling deer numbers.

Dr. John Kilgo, a research biologist with the U.S. Forest Service Southern Research Station, conducted one such study. This research was performed at the U.S. Dept. of Energy’s Savannah River Site (SRS), consisting of a 300 square mile, forested area in western South Carolina. Prompted by concerns over the coyote’s direct effects on deer populations, the study covered coyote habitat, survival and mortality along with the predator’s direct impact on fawn survival.

In his report entitled, Coyotes in the East: Are They Impacting Deer? Dr. Kilgo states, “To date, the SRS research has found that coyotes are, in fact, taking a tremendous toll on fawns. Of 60 fawns monitored over the course of the work, only 16 have survived until autumn, when they are old enough to be safe from predation and can be considered part of the huntable population. That means that 44 fawns, or 73 percent, did not survive. Predation by bobcats and coyotes has accounted for all but one of the deaths. The great majority of the predation, though, has been by coyotes: 36 of the 44 (82 percent) have been either confirmed or probable coyote predation, 6 have been bobcat predation, and 2 have been attributed to unknown predators. The risk of predation is greatest in the first month of a fawn’s life. By about 6 weeks of age, they seem generally able to evade predators, and no fawns have been killed by predators after 10 weeks. Genetic analysis has revealed that many different coyotes kill fawns, with only two individual coyotes being responsible for more than one kill.” 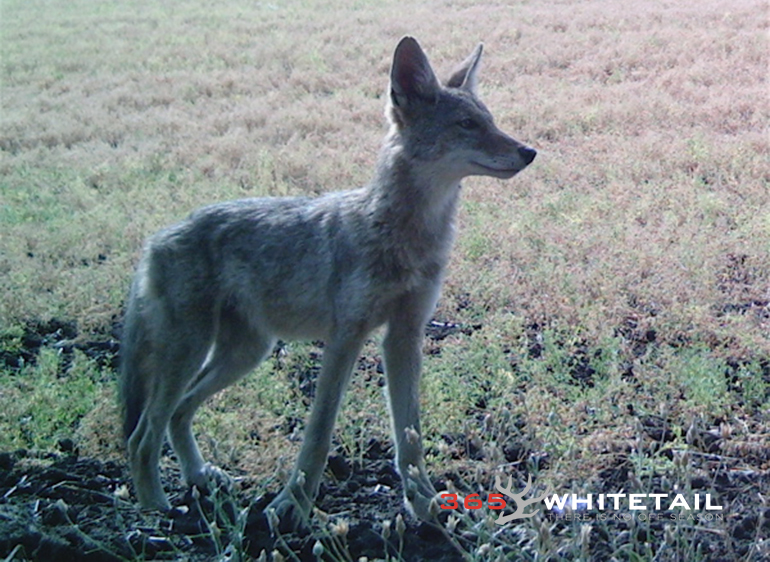 Dr. Grant Woods, a wildlife biologist and pioneer in the Quality Deer Management movement, recently devoted several articles to the coyote predation issue. Dr. Woods cited a study done by one of his graduate students in which 20 plus coyotes and 10 bobcats were removed from a 2000-acre property. This particular property saw a 150% plus increase in fawns the following fawning season.

Dr. Woods consensus on coyote predation parallels that of Dr. Kilgo, and was summed up in this statement, “Whatever the theories and realities were, the current impact of predators on deer, turkey, quail and other game species are real and measurable!” Further studies have provided detailed information much like those already cited. Undoubtedly, the overall impact coyotes have on fawn recruitment is significant.

The biologist’s findings cannot be ignored by hunters. It’s all too easy to ignore the responsibility of applying proper predator management to a hunting portfolio. The ultimatum is clear—if we are to have sufficient bucks to harvest, there must be adequate numbers of fawns added into the population each year.

Pressure And Stress From Predators

It doesn’t require a degree in biology to experience the stress coyotes can put on a deer population. If a hunter spends any time in a treestand, you are sure to see a coyote following or running a deer. Put out a few trail cameras and you will have ample photos of a coyote or a pack of coyotes chasing deer. These practical observations give an adequate education in the fact coyotes and whitetails don’t cohabitate.

Although whitetail research confirms the coyote primarily seeks fawns rather than mature deer as a food source, these studies also confirm predators place unduly amounts of stress on deer herds. Dr. Aaron Moen of Cornell University carried out a research project in which he determined stress to have a definite impact on deer and fawn heart rates. From antler growth to increased metabolism, he noted any perceived form of predation has a negative impact on a whitetails physical health.

Deer are already under significant stress going into the winter months. This especially applies to mature bucks headed into peak rut. Expending energy reserves, they mark scrapes, make rubs and put on miles in an attempt to find the estrous doe. This involves inadequate nutrition, little rest, battling for dominance and loss of fat storage, which in turn creates immense strain on their bodies.

During the rut many bowhunters have rattled or grunted in an opportunistic coyote. These coyotes instinctively knew what was going on and even if they came in out of curiosity; if a buck or bucks were present they would have fled at the sight of a predator. These encounters only add stress and waste even more energy out of a bucks depleted reserves.

Not only do coyote encounters tax deer physically, they also create a predator awareness that breeds vigilance. One biologist reported that is not uncommon to observe fewer deer during daylight hours when a particular property holds a larger number of predators. He also stated that when the number of predators was reduced, the number of game sightings increased within weeks. 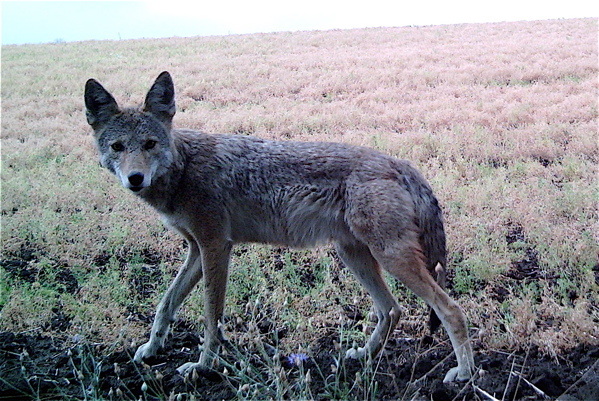 Taking into consideration the threat, pressure and added stress that coyotes put on a deer herd, hunters must carefully consider all aspects of management. Understanding how predators affect hunting areas can help when forming a strategy; a plan that will help to insure the future of successful harvests and as well as provide for Quality Deer Management and adequate fawn recruitment.

Having A Predator Strategy

Gone are the days when hunting had few consequences. If hunting will have a future, deer hunters will have to become proficient managers in the aiding of whitetail survival. Hanging treestands and trail cameras isn’t enough. Taking the required steps to reduce pressure, create habitat and provide adequate nutrition, will be necessary in reducing predation and increasing fawn recruitment.

When statistics consistently show fawn survival rates can double if coyotes are adequately trapped and hunted, can only mean one thing—hunters must trap and hunt predators. Whether we like it or not, the coyote is here to stay. Our only hope is to offset predation with a proper predator management program.

There is a considerable amount of information available to the novice coyote hunter and trapper. Like all hunting and trapping, it takes time to learn and become proficient at harvesting predators. Take the time to talk to an experienced trapper and educate yourself on the animal you pursue, this will help to diminish the chances of educating your quarry. With time and patience, you can become proficient at managing predators.

Although, most whitetail researchers have encouraged limiting the threat of predators through hunting and trapping, they also recognize this is not enough. There must also be adequate provision for the whitetail herd, this includes providing proper nutrients and habitat.

Research has established that fawns are the most vulnerable to predators in their first few hours and days of life. Creating areas of security can help to reduce the number of fawn mortalities and help to increase fawn recruitment. Lindsay Thomas, Jr., Editor of QDMA’s Quality Whitetails addressed this issue in an article entitled QDM and Coyotes, in which he states, “When you have good fawning cover and a lot of it, the coyote has a harder time detecting that prey. Tall grasses interspersed with forbs make good fawning cover. You don’t want a deep thicket, because the doe can’t get in there herself. The fawn can get down out of sight in mixed grasses and forbs, and when it does begin to emit more odor, the grass is minimizing wind movements.”

Today’s market is saturated with deer attractants and supplements. These supplement companies often advertise antler growth as the primary objective. Many articles have been written that focus primarily on a buck’s need of nutrients following the rut. Although bucks should be considered, the necessary supplements a doe requires after fawning often goes unmentioned.

Fawn-survival research shows that feeding and protecting her offspring imposes an enormous load on the overall health of the whitetail doe. Due to lactation a doe must increase its intake of forage. A lack of adequate nutrition can result in poor fetal development, neonatal mortality and fawn abandonment. Providing quality nutrients for your deer herd isn’t just about antlers. Nutrition is a valuable asset to bucks, does and future offspring.

Habitat improvement does more than provide ample food source for deer, this added cover also allows whitetails to gain an advantage in avoiding predators. Biologists suggest this type of management may also increase small game numbers and local rodent populations. In turn the opportunistic coyote won’t have to rely predominately on young and tender venison.

Hunters should also incorporate a sanctuary into their habitat strategy. This serves as an area where deer can retreat from all hunting pressure and any human activity. A sanctuary will aid in reducing pressure, which is a key factor in harvesting mature bucks.

Analysts suggest a successful strategy for limiting predation must be a multi-faceted approach. To hope for a magic wand that would disperse the problematic coyote is wishful thinking. As hunters, our goal must be to understand the effects predators have on deer and set out to establish and manage a quality deer herd as effectively as possible. It will take dedication and commitment, but it’s our only hope in limiting the destructiveness of predators on fawns and future deer herds.