Home / Bowhunting / Scouting For Whitetail ‘Through’ The Season

The mention of ‘scouting for whitetail’ is likely to conjure up a multitude of ideas and interpretations. Every bowhunter has his or her strategy for scouting and depending on the type of terrain and whether the location is Eastern, Southern, Midwestern or Western, there are a multitude of methods that will work effectively. 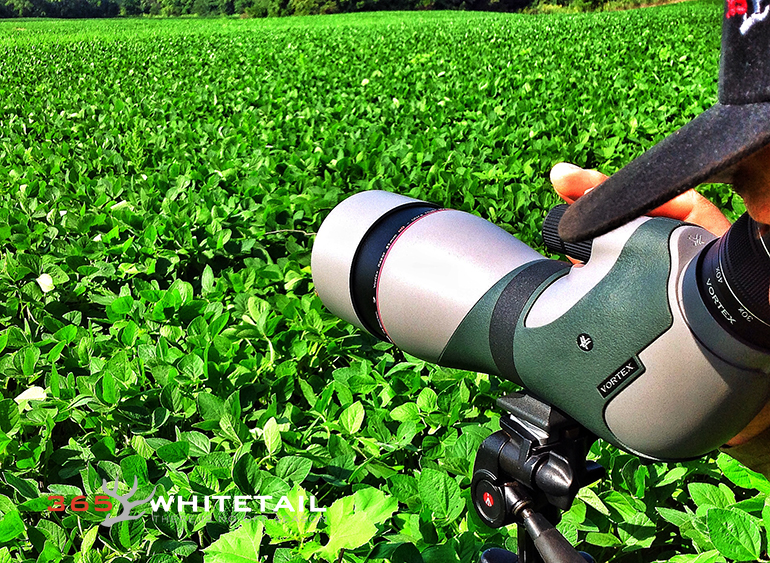 Here in the Midwest where row crops are plentiful and woodlots are home to wary whitetail, ‘scouting’ seems to have a connotation as something that ends once hunting season begins. This idea is only partially true and here’s why.

In a few short weeks most bucks will have shed their velvet or be in the process of doing so. This means the bachelor groups you saw in late summer will have broken up and become individual bucks establishing dominance and moving into their fall ranges.

(This explains why you’re likely to have a buck you’ve never seen before suddenly appear out of nowhere and why a buck you’ve watched all summer may disappear. Keeping this in mind, this is a good time to move your trail cameras from field edges to funnels or staging areas.)

Row crops and mast crops can also attribute to deer relocation. If white oaks are dropping or apples are plentiful, deer may ignore a soybean field. Deer that fed through the summer on green soybeans will move on to other food sources once the beans start turning yellow. Deer that fed on corn may move back to a freshly shelled bean field once the corn is harvested. Continuing to scout is the only way to keep up with the chess game of hunting these transient whitetail.

Scouting From The Outside In

Beyond understanding how and why whitetail bucks move to and from certain areas, there must also be some sort of vigilance in order to keep track of where a particular buck has relocated or will relocate to.

While trail cameras are an asset to any bowhunter and serve as a valuable scouting tool, of equal importance is a quality pair of binoculars and/or spotting scope. When used in conjunction with your trail camera(s), glassing from a distance can provide you with details which will assist in pinpointing the exact location needed for stand placement. 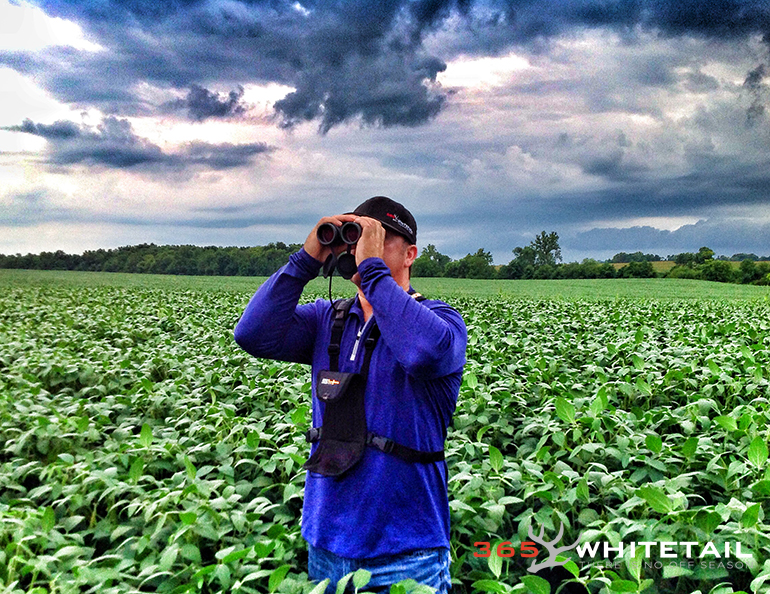 Scouting for whitetail ‘from the outside in’ also helps to limit the overall impact made on your hunting area, along with providing valuable insight not available any other way.

Adam Hays III of Team200 has scouted from the outside in and with great success. Few bowhunters can boast of three 200-inch-plus bucks on their roster let alone other bucks topping 170-inches. Hays has a proven track record that scouting with binoculars and/or a spotting scope is a valuable method of scouting. Hays secret is to locate a trophy buck and scout him from a distance until he is intimately acquainted with that particular deer, its habits and movements.

By taking the time to scout with a spotting scope or binoculars, Hays is also able to determine the wind direction, temperature, barometric pressure and moon phase that coincide with a particular bucks travel pattern. While most of Hays’s scouting is done pre-season, the same tactics can be used all through the hunting season. 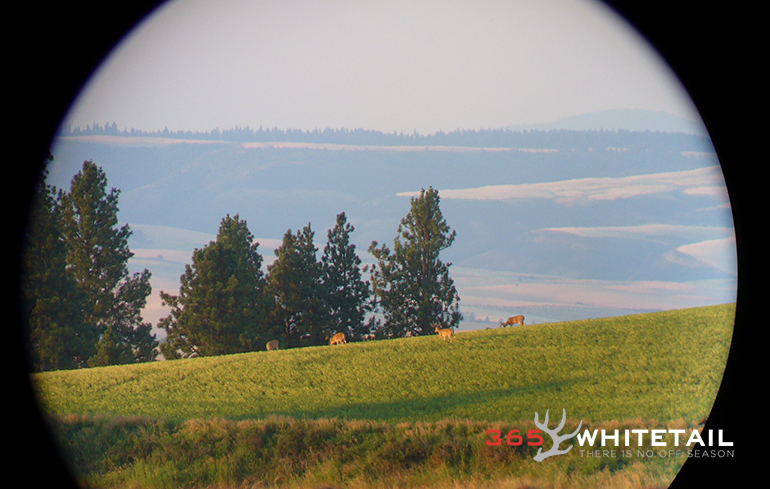 Most of my life I have hunted in areas where row crops are the main food source for whitetail. Other than a few years in the West, the Midwest has been home. But even in the West I found whitetail will travel for a considerable distance to feed on alfalfa, garbanzos or lentils.

Depending on when deer move into their fall ranges, and what food sources are available in your area, make it a practice to set up, sit for periods of time and glass with binoculars or a spotting scope during the season. Glassing can also be done during the rut when bucks are more visible midday. It seems like a simple strategy but it will pay off in the long run.

In the picture below these bucks were glassed on bordering property we did not have permission to hunt on. Our trail cameras never did get a picture of either one of these cagey critters, but scouting from the outside in worked like a charm. Because we took the time to glass, we knew their general location and were able to plan accordingly. When the rut kicked in the 149 3/8ths 8-point in the photo came over on the property we did have permission to hunt—the rest is history. 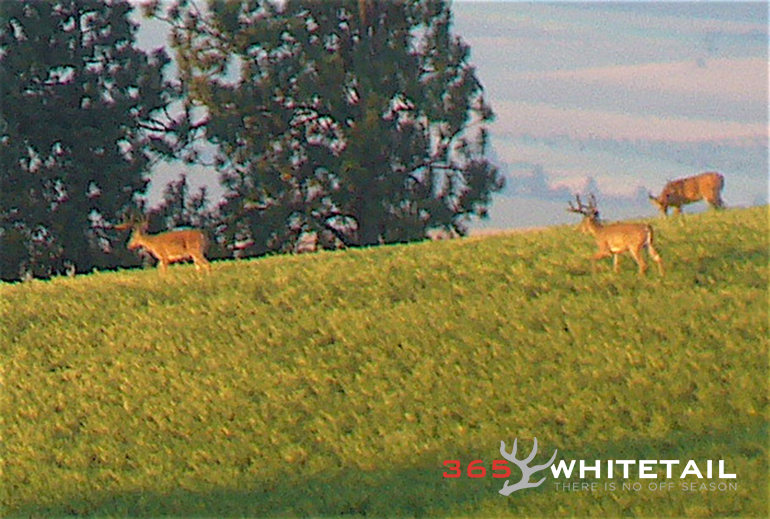 
It’s important to remember when scouting for whitetail, that just because you don’t have 500 acres of soybeans or corn on your property, doesn’t mean you can’t locate what buck or bucks are within the vicinity of your hunting area by glassing fields, power line right-of-ways, or clear-cuts.

The best time to glass these areas is during the early morning or late evening. And be sure to glass diligently and watch where the food source and thick cover meet. Bucks will often hang in the shadows, move at last light and use terrain features to remain less visible. 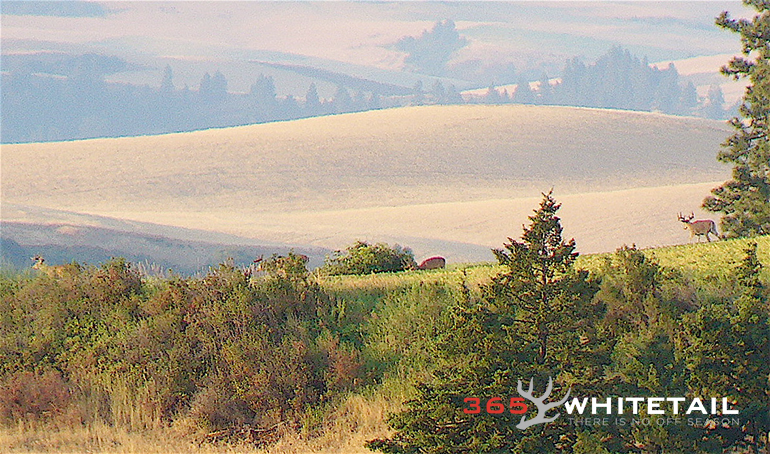 During the rut be sure to glass for doe groups. Does will often seek out thick cover in an attempt to hide from frisky bucks. Once the chase phase kicks in, does can often be seen sneaking into food sources in the mid-morning in an attempt to have some peace and quiet at the breakfast table. Pinpointing the does location gives the bowhunter a better idea of what transition area a buck might use to access them.

As season progresses and the weather turns colder, be sure to glass those south-facing meadows, hillsides and field edges. Bucks will often bed very close to food and can be found with a diligent scan of these often overlooked areas. I have also seen exhausted post-rut bucks hang near deserted barn lots or pastures. So be sure to glass in areas you’d least expect a mature buck to be.

While it may seem like an impossible game of cat and mouse, taking some time to scout both pre-season and during the season can make all the difference when trying to harvest a mature buck.

So dust off the lenses of your bino’s and feel free to let us know what bucks you glass up through the season.