Few foods can match the tantalizing taste of bacon wrapped venison bites. These small delectables offer the palate a perfect blend of meaty and melt-in-your-mouth flavors.

While some might think edibles have to be big in order to offer much taste, just one nibble on a bacon wrapped venison bite will put the kibosh on that theory.

Most hunters will agree that loin, otherwise known as backstrap, is the crème de la crème when it comes to venison. Bacon wrapped venison backstrap is a favorite among venison connoisseurs. But, with an adventurous spirit and a little time in the kitchen, you’ll be surprised what other cuts of meat can offer a similar flavor.

While processing their deer, some hunters save smaller pieces of venison for burger or stew. If that’s your preferred way of eating venison, that’s up to you. But, you may want to consider setting aside some larger pieces of burger or stew meat in order to make bacon wrapped venison bites.

1. Begin by using your choice of venison. This can either be a roast cut into 2-inch square pieces, trimmings at least 2-inches square or small cubes of shoulder.

2. Next, prepare a marinade of your choice. We prefer the following marinade, but you’re free to make your own.

3. Pour marinade into a gallon ziplock bag. Place the venison bites into the ziplock and allow to marinate in the refrigerator.

4. After the venison has marinated for at least 4-6 hours, begin to prepare the bacon. Simply cut full-length bacon strips in half.

5. Remove the venison bits from the marinade and wrap them individually with a half of strip of bacon. Fasten the bacon with a toothpick.

6. Once the bacon wrapped venison bites are wrapped, you can garnish with any seasoning of your choice.

7. Preheat grill to medium heat and cook venison bites until slightly pink in the middle.

While simple, this recipe has always resulted in zero leftovers. We even took these bacon wrapped venison bites to a company party and it was a hit among both hunters and non-hunters alike.

So, fire up that grill and enjoy the luscious taste of grilled bacon wrapped venison bites. 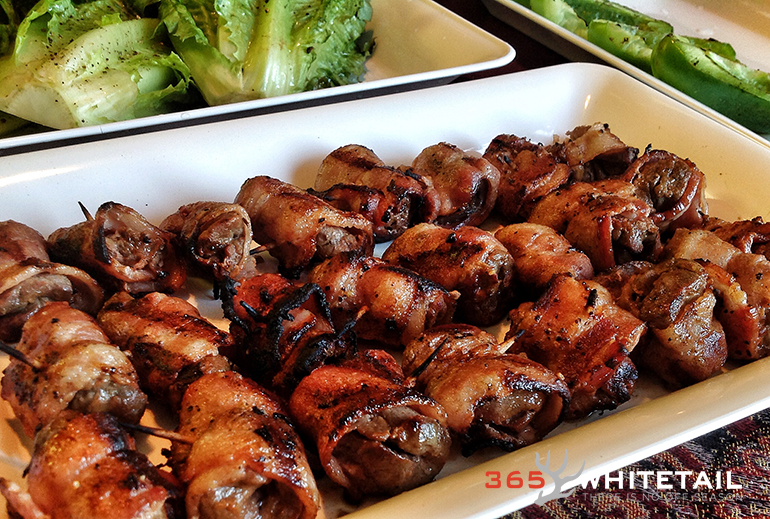