For as long as I can remember he’s had a knack for making things. Give him a few moments and with what looks like junk, he’ll make a fine piece of archery equipment. God only knows how many handcrafted bows I’ve tripped over in the last 5 years. In my book, they’re just sticks, to him they’re the beginning of a finely crafted longbow.

He’s not like my other boys. He would rather shoot traditional archery than have the finest compound on the planet. His dream is to own a Hoyt Dorado.

His heroes are Fred Bear, Fred Eichler and anyone else who hunts with traditional archery equipment. He’s so enamored with Fred Eichler that his arrows have pink feathers and his Bear recurve has Fred’s signature – right above the arrow rest.

His idea of quality time is having dad throw clay pigeons for him to shoot. Actually, I’ve learned to dodge flu-flu arrows and judo points quite well.

At only 12-yrs-old, he’s the talk at local 3D shoots. Whether or not he has the high score – the sponsors and competitors are simply impressed by how well he shoots instinctively – so the lucky little bugger usually wins something.

When this year’s deer season rolled around, it came as no surprise that my little traditional archer would want to harvest his first deer with a recurve. Try as I might to persuade him otherwise, my rational talks fell on deaf ears. He wanted nothing to do with a gun and knowing personally the deep satisfaction that comes with bowhunting, I relented.

No doubt there would be some that would disagree with my decision. To be truthful, I’ve battled it myself. Proficient as he is, I’m not into taking chances when it comes to proper shot placement. But in all fairness I had to ask myself, “Will I teach him that hunting is simply about easy success, or will I teach him the ultimate goal lies in a deep sense of satisfaction?”

On our very first bowhunt together, four corn-fed does made their way across the backside of our family farm and passed directly to the left of our treestands. Working their way to the 20-yrd mark, we stopped the largest doe with a grunt. This was the limit of his effective shooting range and he waited until the doe was perfectly broadside. After carefully drawing his bow, he released the arrow just as I had watched him do countless times before. With this being his very first encounter with a whitetail, I was impressed that he stuck to the fundamentals.

I watched as the slightly startled doe lumber off and heard a loud whisper laced with disgust as it said – “I missed.” 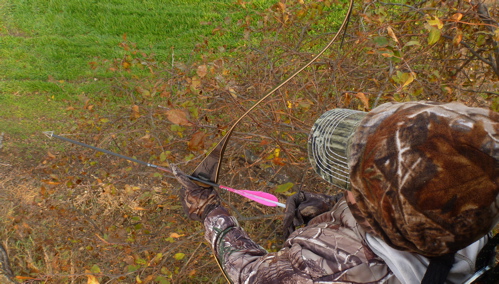 As a father, this was a very bittersweet moment. Whether it was a miss or the deer ducked – who knew. What I did know was, he was proficient enough to make the shot. I also knew we could’ve easily filled a tag if he wasn’t set on hunting with traditional archery equipment. This was a chip shot with a gun and a very possible shot if he’d chosen to use a compound bow with sights. But his sights were set on the challenge and for that I was very proud.

As we walked across the field in the darkness, I put my arm around his shoulders and told him how proud I was. I also reminded him that he’d chosen to set the bar for personal satisfaction at a level that the majority of bowhunters will never attempt to achieve.

If the ultimate reward comes by harvesting a deer with a recurve, then I’ll encourage my son to pursue a tough satisfaction – not easy success. 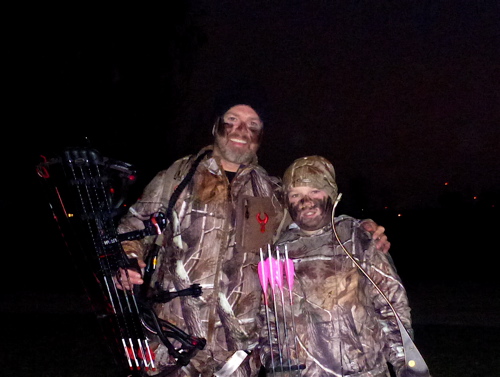