Whitetail deer are communicative by nature. By using vocal, visual and olfactory cues the entire herd is able to establish its pecking order, respond to danger and reproduce effectively. Understanding and interpreting a whitetail’s communication, such as the snort-wheeze can be key when attempting to harvest a trophy whitetail.

Successful hunters understand the effectiveness of using grunt tubes and doe bleats in order to mimic a whitetails vocal communication. These calls produce definite results and when used properly can aid in bringing a deer within shooting range of your setup. With the rut getting into full swing in most areas, there is no better time of year to begin communicating with your quarry.

An often overlooked, yet extremely effective whitetail call is the grunt-snort-wheeze.

The grunt-snort-wheeze is the most threatening of vocalizations produced by a male whitetail deer. This sound is produced primarily during the peak rut and consists of a drawn-out expulsion of air through the pinched nostrils of the deer. Made by a dominant or mature buck the grunt-snort-wheeze sends a “back off Jack” message to an encroaching underling. This sound is used as a defense mechanism to protect territory, hence preserving a bucks breeding rights.

By using this sound the hunter gives a mature buck exactly what he’s after, a cue that there must be an available doe in the area. A mature buck that is searching for where the hot doe’s are; even if another buck is already tending them, will gladly take up the challenge of the snort-wheeze for the exchange of a hot date.

The grunt-snort-wheeze call seems to work predominately on more mature bucks that may not necessarily be seeking to fight for dominance but are intent on finding the hot doe in the area. We would recommend you not use this call on younger bucks. This call will send a message to a younger buck that he might get his tail whipped if he doesn’t “get out of dodge.” 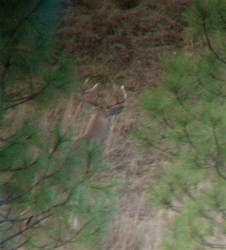 If you know of a good travel corridor, breeding-staging area or can set up close to where a mature buck is bedded, these are all great places to use a grunt-snort-wheeze. A few years ago we used the snort-wheeze to call a buck to within shooting range from over 500 yards away. This call is amazingly effective in an area where bucks are tending does and competing for territory.

If you plan on rattling, grunting or using the snort-wheeze, be sure when placing your stand or blind that you have thick cover nearby. If you set up and call in an open or sparse area, the first time a mature buck comes in and cannot see the deer that made the grunt-snort-wheeze, there’s a good chance he will figure out something is wrong. Having thick cover around or behind your setup will give the buck the perception that the vocal deer is in the cover. With adequate cover the buck will be more likely to come in for an inspection and get close enough for the shot.

When using the snort-wheeze remember that a mature buck will try to approach from down wind. If you can set up in such a way as to cut him off before he can get directly downwind, this will obviously work to your advantage. This is one benefit of using a decoy with any vocalization. Although the wind is always a factor and the setup must be made accordingly, the sight of the decoy is likely to override the bucks instinct of trying to find you with his nose.

With the grunt-snort-wheeze being the voice of a mature or dominant buck, it’s best to use during the peak of the rut. In pre-rut we have incorporated the snort-wheeze into a rattling, grunting sequence with good results, but optimal results have definitely been peak rut when bucks are on their feet cruising for does during the mid-morning to mid-day. 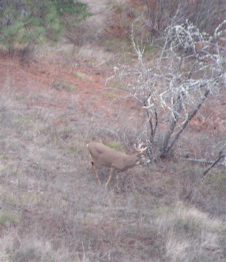 Across the years bucks have been most responsive to the snort-wheeze in between 10am and 2pm. Although mature bucks may hang up with an estrus doe during the day, most breeding activity takes place under the cover of darkness. After a buck breeds a doe he will begin to seek out other does that are coming into estrus, thus traveling through the mid-day. We are not saying that you shouldn’t snort-wheeze in early morning or late evening, but a buck that has run with the girls all night seems to be more apt to come to a call after his morning or afternoon nap.

Remember when calling that whitetail have incredibly acute hearing and the innate ability to accurately pinpoint the source of a sound. As with all aspects of whitetail hunting, be patient! Allow time for the buck to investigate the origins of the vocalization on his schedule and not yours.

Mimicking the grunt-snort-wheeze is very elementary. First, loosely place your top teeth on your bottom lip. Then in a drawn-out expulsion of air follow the cadence of (phiit,phiit,phiiiiiiiiiiiiiiiiiiii). For volume, cup your hand and use as a sound chamber. You can either use one or two hands depending on volume and how far you want the sound to travel.

There are many grunt calls on the market that include a hollow chamber designed specifically for the grunt-snort-wheeze. These calls will help to increase the volume of the call and allow you to use a combination of a grunt along with the snort wheeze.

The snort-wheeze is a very effective tool for the whitetail hunter. If you experiment with the call this year please let us know the results. The object of the snort-wheeze is simple… you want to be the one being hunted.

5 thoughts on “The Whitetail Grunt-Snort-Wheeze: Why, Where, When and How”